The babes have become little porkers lately! Corbin went from drinking just under 5 ounces last week to wanting 6! Lynley bumped herself up to 5 from 4.

We had been having trouble getting Corbin down, and we thought he was going through some separation anxiety, but he must’ve still been hungry because now he sleeps like a rock. Lynley was sucking down every last drop of her 4 ounces in ten minutes, so I started offering a little more and a little more, and she is finally content with 5 ounces. That’s crazy to me, but they are growing, and that is great!

The other good news we received this week was that they do not have any developmental delays. I’ve mentioned the Early Childhood Intervention program a few times, and they finally had their evaluation. Neither one of them qualifies for therapy because they are exceeding expectations for their adjusted age, which is 11 weeks. We had them sitting up on the couch when the ladies came in to evaluate them, and I think they made up their minds in that moment that the twins would not be enrolled. It didn’t take them long to score them, and they seemed really impressed at how advanced they are. Of course, for their actual age, they are a little behind in some areas. But for adjusted age they are doing amazing!

I’d just like to give myself a pat on the back, even though I probably don’t have much to do with it. Derrick claims they are such rock stars because they have 50 percent of his genes! Mmm hmmm…. But we can’t help but think that my staying home with them has helped them develop on track. I spend a lot of time in their face playing and talking to them. I read to them every day and at night before bed. When they are hanging out in their swings, I talk to them about what I’m doing around the house. We play on the toy mat a couple times a day and do tummy time. Sometimes, they “help” me fold clothes and wash dishes.

(which really means, one of them won’t stop crying, so I put them in the Baby Bjorn and wear them while I do these things!) Maybe they cry sometimes because they’re so tired of me telling them that monkeys eat bananas and go “ooh ooh ooh”? I can’t help it. Practically everything they wear has a monkey on it and they have about 10 monkey toys. Anyway, I guess what I’m trying to say is that they definitely aren’t starved for attention!

I did request that they be put in a follow along program. This will consist of me filling out a questionnaire every few months about what skills they’ve mastered and are learning and sending it in. If anything raises a red flag to the therapists, they will recommend another evaluation. I don’t think we really need this since we have an amazing pediatrician who watches them closely, but it’s free so why not. 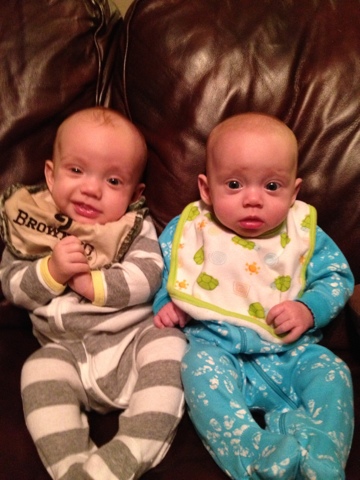